The Australian donations via Angela after the earthquake were amazing!! So many people had donated and after covering all for the Aandhimul village there was enough surplus to donate to another good cause. And it was to be ‘Bricks for Bhothang’. The story about them is written below: 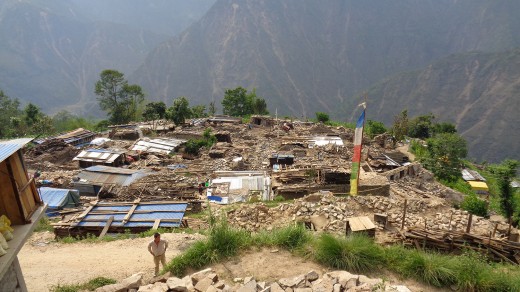 April 25 2015, Nepal was hit with an earthquake of 7.9 magnitude. It has caused devastating effects in Kathmandu and many rural areas of Nepal. Thousands injured, thousands of lost family members and many more now homeless. This country needs our help!

Buddha came to live in Australia when he married his wife Sarah in 2001. We now live in Adelaide with our 2 beautiful children.

Buddha is originally from a village in the district of Sindhupalchowk. His village “Bhothang” is situated North East of Kathmandu approximately 150km from the city in a very remote area of the Himalayas. At about 2500m in altitude his brother, sisters and extended family live a very simple life of growing crops and tending to their animals.

They have no access to mains water, electricity is limited to one light globe per house at limited times of the day, and doctors or medical care is available 1-2 days walk away. Only in recent years has a road been built closer to Bhothang for slightly easier access. In the monsoon season this road is not always accessible due to rivers flooding and landslides. 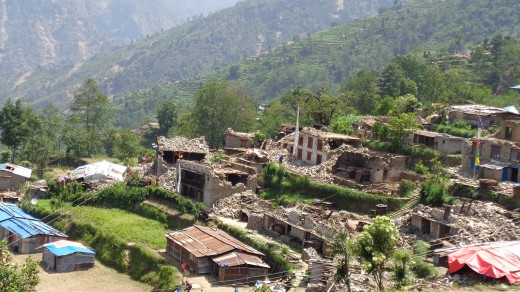 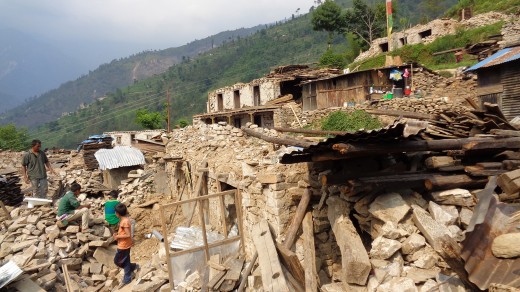 Bhothang was affected terribly with all houses being destroyed. They have lost all their belongings and food under the rubble. Some lives have been lost and many injured. We felt we had to do something to help our family and this village and we started Bricks For Bhothang and raising as much money as possible.

On 30th May 2015, Buddha travelled to Kathmandu, Nepal for 2 weeks, to take the money raised to help his family in the village of Bhothang. 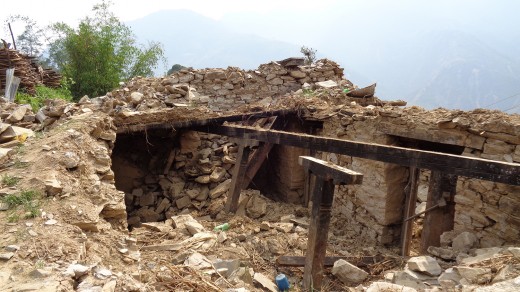 My trip back to Bhothang was a great one, but also emotionally very hard to see all the destruction and conditions my family and friends are now living in.

Bhothang has been completely flattened. The houses that are still half standing have been damaged so bad that they will have to be pulled down to be able to be rebuilt. 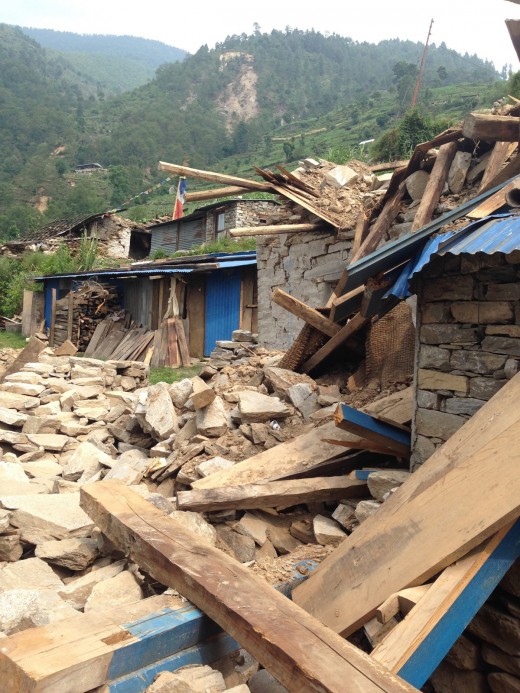 I was happy to see that the people of Bhothang had quickly saved some building materials (wood, metal sheeting and tarps) and built small shelters to get them through the monsoon and then the winter at the end of the year. Some families have moved into the shelters originally homing the families’ animals. These are not very comfortable or warm and certainly not something they can live in long term but it’s something they will have to make do for now.

The first part of my trip was busy in Kathmandu organising what to take up to the village. With the help of family members in the city we bought 126 bags of rice (30kg/bag) and 126kg of bean/lentil mix. We bought 10 large tarps and lots of clothing from Australia. 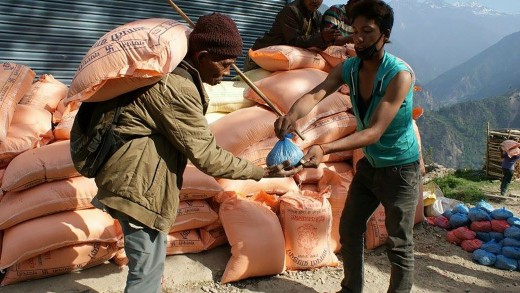 We sent the truck full of rice and lentils a day earlier as we knew the roads were rough and slow going. It took the truck about 10 hours to travel 100-150km! The following day we left in a hired 4wd and it took us about 6 hours to drive to Bhothang. The roads had been cleared but still very uncomfortable to drive on. Mud, potholes and rocks, we could only drive about 20km/hour most of the way. We finally arrived and were able to distribute the food to every family and handed out the clothing. Everyone was very happy to receive something.

I also took some donated first aid kits to a temporary medical camp in Yarsa, a neighbouring village to Bhothang, that was set up to help with minor injuries. 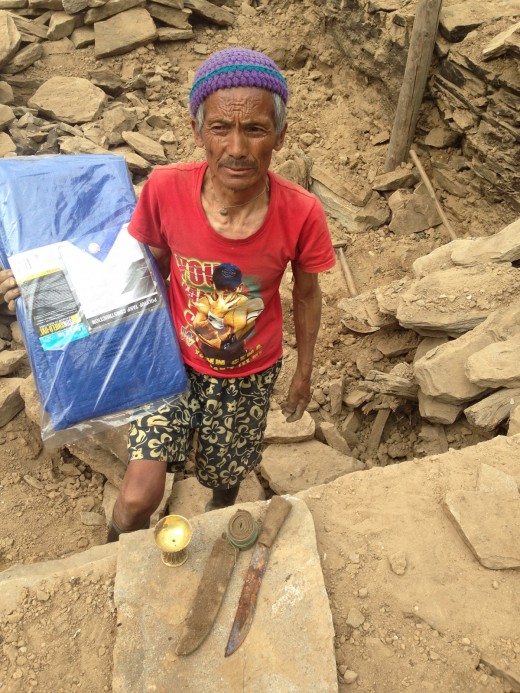 Our next plan is to buy some new roofing for as many families as possible and also try to introduce chimneys into the homes as this will be a great benefit to the people’s health. We would also like to help rebuild the local school. The roof is still standing but the earthquake destroyed the walls. With the help from our donors and the very generous help from The Aandhimul Project we believe we can achieve this. I am hoping to travel back to Nepal in December 2015/January 2016 to purchase the supplies and assist in some rebuilding. 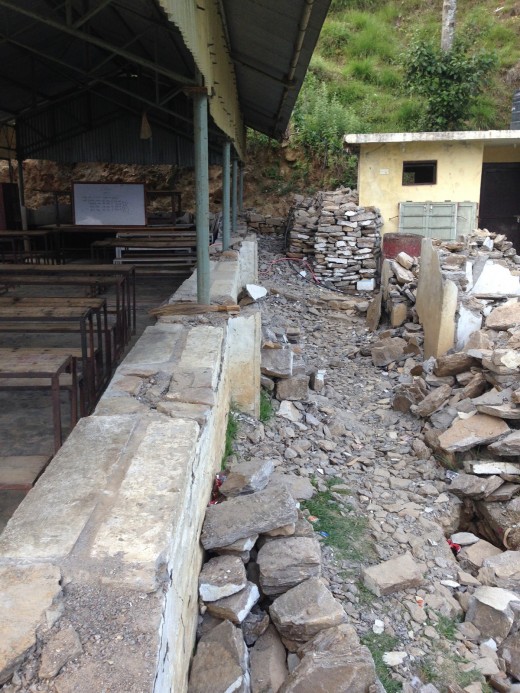 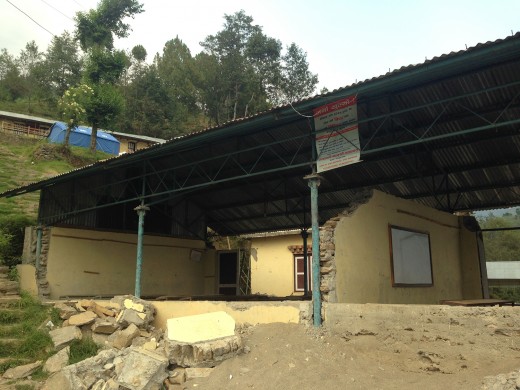 We will update you on the progress of rebuilding Bhothang and what we achieve during our next trip to Nepal.

Thank you to everyone from the Aandhimul Project and your generous donation in helping the people of Bhothang get back on their feet. We appreciate your support! 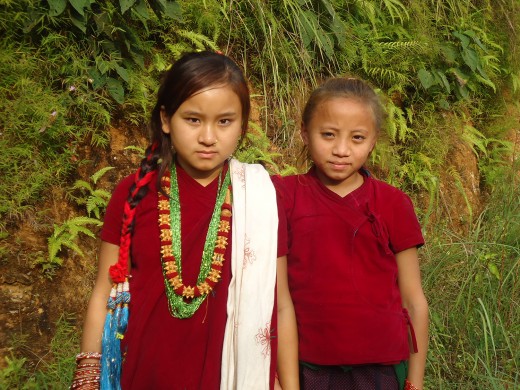 After the celebrations of Deshain and Tihar daily life has returned to the community. Though that did not stop the community to continue to enjoy the festive period. From November 11 to 17 school staffs, students and villagers played Bhailo (a kind of culture played in Tihar) to collect fund to build Nursery building. They had organised khaja (lunch) program for those people who took part in Bhailo program. Before the khaja Bikram, our project manager, held a meeting amongst the teachers and School Management Committee (SMC). They had collected a good sum of money. They also decided to use this money towards the new nursery building. They are now able to contribute 30 percent of the cost. 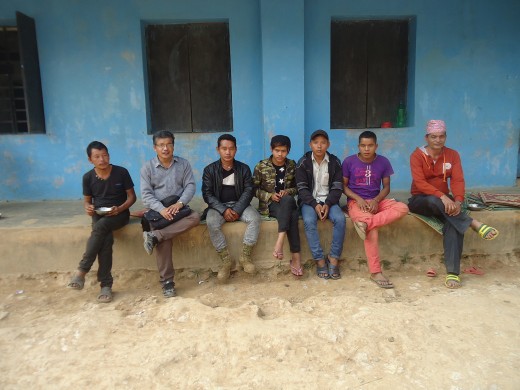 From the new academic session 2072, which means from 14 April 2015, Bikram has developed a separate attendance sheet for our project staff. They do their attendance on our project attendance sheet and the school attendance register too. The teachers are regular on their duty. If they need leave they inform Bikram one day in advance unless suddenly ill or other emergency. And, except public holiday, they get one day leave in a month. Bikram mentions that he finds them regular in attendance and punctual.

These two assessments are prepared by World Education, an INGO, which is used throughout the schools of Nepal. Bikram received those assessment models from Chij Kumak Shrestha who on occasion comes to train in Bandipur, our project teachers always joining.

Bikram applied for those assessments in beginning of then new academic session and discussed with the teachers during the Kathmandu tour, in the presence of 5 school teachers and trainer Ela Piya. Our students achievement is good. According to DEO calender we have conducted first quarterly exam. In this exam their achievement is good. Participating in teacher training, Bikram reports he has found an important change in the teachers’ teaching skills. Firstly they learn to make job chart which make student participatory in learning activities. Secondly making materials and thirdly teaching through play and singing. 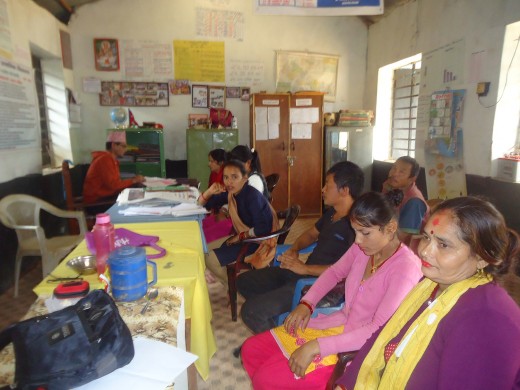 Whenever Bikram visits the school he listens to the teachers and headteacher discuss about school life. Sometimes he gives them written assignments too to refresh on what they have learnt in previous teacher training.

Bikram have given the responsibility of preparing khaja to Kamala, and she is doing her duty honestly. The children a getting khaja regularly. Though, due to the Indian blockade there is no cooking gas, so they need to cook the khaja with firewood.

The Litter Officer, Ran Bahadur Bhujel, is doing his duty well. Sometimes he does his work in Bikram’s presence too. The village is cleaner than past. Sanitation in some areas is still poor. The main route to school is clean.